Ours is the Fury

Play only during a challenge in which you are the defending player.

Action: Choose a kneeling character you control. That character is now participating as a defender. If you win this challenge, stand that character. 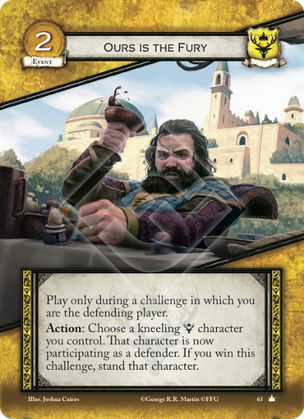 Ours is the Fury doesn't care about challenge icons or stealth. Those requirements are only checked during the "normal way" to add characters to a challenge, during the"declare attackers" and "declare defenders" frameworks, whereas this ability is an action performed during an action window within a challenge.

For example, Robert Baratheon can be made to participate in an intrigue challenge with Ours is the Fury's ability.

Likewise, if Robert is stealthed, he can still be added as a defender with Ours is the Fury (provided he was already kneeling).

scantrell24 3263
If Robert is already kneeling as a defender, can he be targeted by this card? Although the sentence "that character is now participating as a defender" will not change the game state, the last sentence (about standing) still has the possibility to change the game state. — Prof*Joe 1 1/31/17
Yes, you can use Ours is the Fury on an already-defending character, — scantrell24 3263 1/31/17