Play only if you are the first player.

Challenges Action: Choose a defending character with STR 5 or lower. That character does not contribute is STR to this challenge. 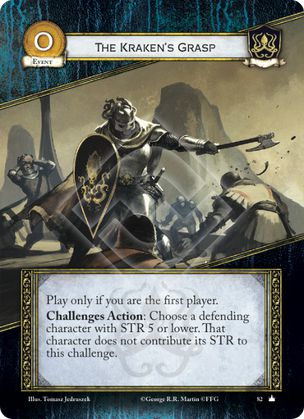 Kraken's Grasp only checks its STR restriction when it's played. The lasting effect isn't conditional (if it were, it would read "Until the end of the challenge, while that character's STR is 5 or lower, it does not contribute ..."). So once a character is targeted by Kraken's Grasp, boosting its strength (with Widow's Wail or Iron Fleet Scout for example) does NOT counteract Kraken's Grasp.