Action: Choose and stand a unique character you control. At the end of the phase, if that character is still in play, return it to your hand. 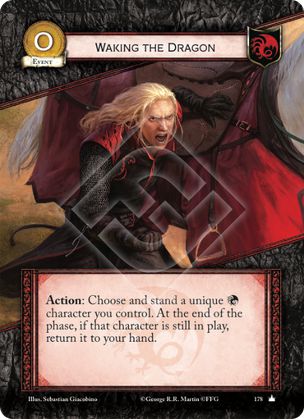 Can I use Waking the Dragon on an already standing character? Yes. When an ability has multiple effects, you can still trigger the ability for one of the effects, even if the other one cannot resolve.

What happens with multiple effects targeting the same character at the end of the phase? Delayed effects initiate (and resolve) in an order decided by the first player - regardless of the order the effects that created them were played. In the case of Waking the Dragon and Tears of Lys, the FP would decide whether that Unique Targaryen character wound up in the dead pile, or its owner's hand. ​After this, reactions to the phase ending (or to that poor, poisoned character dying) proceed in the usual order.