Interrupt: When claim is applied for an unopposed challenge in which you are the attacking player, kneel your faction card to choose a character without attachments, controlled by the losing opponent. Instead of the normal claim effects, kill that character. 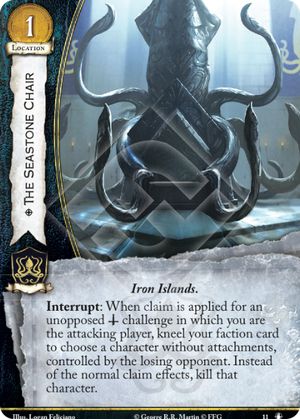 What happens if my opponent chose military claim for Calm Over Westeros? They reduced your claim, but they don't prevent it from happening.

Claim replacement effects are triggered during the C step of DUCK (after Determining the winner and gaining the Unopposed bonus but before Claim is applied). These effects do not resolve immediately, rather they modify the way claim will be applied after all interrupts are played. For example, with Seastone Chair you choose a character, and set up an effect that will kill that character when claim resolves. But after you trigger Seastone Chair, and before you resolve claim, your opponent might play his own interrupt to applying claim (like Vengeance of Elia) and set up a new effect that will modify the way in which claim will resolve. This new replacement effect will override the previous one. Once all players are done playing Interrupts to "when claim is applied", resolve the claim in accordance with the most recently played replacement effect.

scantrell24 3264
Note to mention, if 'The Seastone Chair' interrupt is cancelled by 'Treachery' (or by any other triggering abilities canceller), then the challenge returns to the normal claim applying (the claim itself is not cancelled). — Kamerad 1 4/6/16