Each character you control gets +1 STR.

Reaction: After a challenge is initiated, kneel Winterfell. Then, each player with a non-Winter plot card revealed cannot trigger card abilities until the end of the challenge.

Ted Nasmith
Wolves of the North #17. 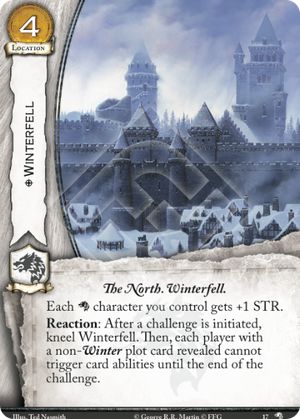 scantrell24 3297
When Tyrion is in play, and the Lannister is first player, i guess that if the first challenge initiated is an intrigue one, Tyrion has the time to activate his ability ? — Benji 758 5/5/16
@Benji yes, exactly. — Protikon 1 5/5/16
would this also mean that if my opponent has dracarys and is first player, he can burn one of my part chars when I initiate a challenge? So before I can use Winterfell? — Stoenas 83 5/10/16
No, as Tyrion's ability is a react responding to the same trigger, while Dracarys is an action needing an action window that hasnt occurred yet — SirLargeness 475 5/13/16
Does this stop Stealth? I'm not sure it does, but me and my GF aren't 100% sure. — Kitescreech 1 5/15/16
@Kitescreech Stealth is a keyword, and you'll see above that Winterfell does not stop keywords — scantrell24 3297 5/17/16
Is winterfell looking for the trait winter on an opponents plot card or a trait that is not winter? EG if i used old nan to make my opponents first snow of winter (winter plot) an Edict or summer or whatever. could they trigger effects? depending on which way you read it, it could be either way as they do have a none winter plot in this case. but if winterfell is looking for winter rather than none winter plot it would be a winter plot — clarky101 41 6/16/16
correction... if i use old nan to make it a summer traited plot as well as winter — clarky101 41 6/16/16
RR pg. 4 'The word "cannot" is absolute, and cannot be countermandated by other abilities'. so why forced are not affected by this card? they are still triggered abilities — hallas 1 7/1/16
Forced reactions are triggered by the game, not the player. Since winterfell is preventing the player not the game it still happens — clarky101 41 7/5/16
Can I use "Winter Is Coming" first then use Winterfell's reaction ability? — jtfied 1 7/11/16
Can we use "Winter Is Coming" then use Winterfell's reaction? — jtfied 1 7/11/16
@jtfied no. Winterfell needs no be knelt as the challenge is declared. Your action window is after the — Zed 1 7/18/16
If a revealed plot has more than one trait, one of which is not winter, can they trigger abilities? I read it as not as they have a non-winter plot even though it is winter as well. — blackkat96 16 7/26/16
FYI, Winterfell does not kneel if Treachery'd. It simply gets it's ability cancelled. — tonythetiger891 55 3/15/17
Official ruling: Winterfell imposes the "cannot trigger card abilities" restriction on players that have a non-Winter plot revealed at the time Winterfell is activated. If a player with a Winter plot later uses The Rains of Castamere to reveal a new, non-Winter plot, that player remains unaffected by Winterfell, and can still trigger card abilities. — mplain 213 6/16/17
If winterfell doesn't kneel when cancelled, does it mean you can activate it again (since we're still in the same "reaction-window")? — TheRobin 1 8/3/17
@TheRobin No, you can trigger a reaction once per triggering condition. For example, if Littlefinger is treacheried, can you trigger him again? No. — scantrell24 3297 8/3/17
If Winterfell was discarded by Put to the torch Event, and another Winterfell is drawn, can I put it into the play? — Tirrel Florent 1 6/3/19
Can Winterfell prevent “the rains of castamente” to change plot if the first plot is not a “winter” one? — lorenzobosisio 1 2/4/21