Action: Pay 1 gold to give Janos Slynt +2 STR until the end of the phase.

"And this so-called Lord of Harrenhal is a butcher's whelp upjumped by the Lannisters. Small wonder he is venal and corrupt." Ser Denys Mallister
Anthony Feliciano
Across the Seven Kingdoms #10. 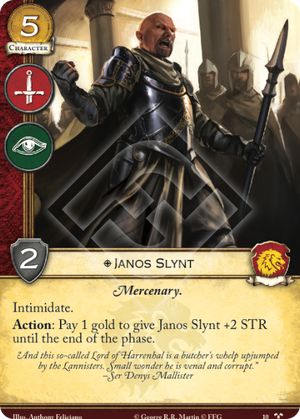 Pretty interesting card, can be pricey but your playing Lannister and he is loyal so it's not so bad. Excellent synergy with core Tyrion, making an intrigue challenge with both of them can intimidate plenty of powerful characters, also great for triggering Rains and other win-by-5 effects. Mercenary is a neutral trait so far but I believe it was a negative trait in 1st edition so we will see what comes of that.

R2devo 1
Not sure what you mean regarding dominance. If you pump Janos in the Challenges phase, the effect wears off at the end of it, and in the Dominance phase the first thing that happens is counting dominance and awarding power, and only after that there's an action window in which you can use Janos's ability. — mplain 211 3/7/17
Yes, that is true, I should pay more attention when I am typing stuff, I'm not sure where I got that idea. — R2devo 1 3/8/17