Action: Kneel Plaza of Pride and discard a card from your hand to choose and stand a character with printed cost X or lower. X is 3 higher than the printed cost of the discarded card. 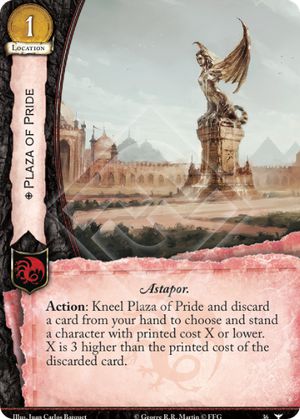 If any card is to go on the restricted list it's this one. non-loyal and 1 gold is beyond insane. I've played this to death and it's in all honesty ruining the fun of the game for me and opponents.

If this was 3, even 4 gold, I would still run it!! In combination with a high card draw turnover (Secret Schemes works particularly well) the effect is devastating. Unless you're playing against Greyjoy, this sucks the fun from the game. I've now dropped it from my decks only to reserve fun left in the game.

I feel the text was put together with little consideration. If X equaled the printed card cost of the discarded card this would work much better. I've never had the situation of the X=3 higher causing any kind of struggle to me.

The black cells was a card from v1.0 that I had the same issue with (1 gold shadow). I won a tournament of this and some lousy shadow cards that entered and exited in a loop. Spoiled the game.