Reaction: After a character enters play under your control, pay 1 gold to have Mace Tyrell gain 1 power. (Limit once per phase.)

Action: Kneel your faction card to remove another character you control from the game until the beginning of the next phase. 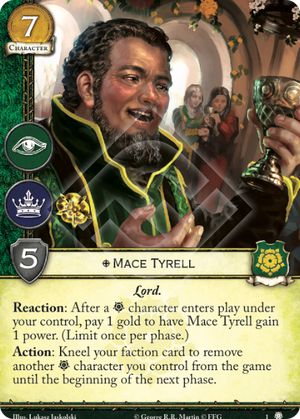 mplain 221
Would this ability be able to save a character from Dracarys? I'm guessing it would, but I'm not 100% sure on that. — CMonster907 21 7/21/17
It's an Action, not an interrupt. You cannot use an Action ability until after Dracarys resolves. — mplain 221 7/21/17
Does the card enter play standing? RRG: "The default state in which cards enter play is standing." — Kutta 14 7/25/17
Yes, the card enters play standing. — mplain 221 7/25/17
but the dracarys question has validity...if you pump the character with a until end of challenge STR pump..and he gets dracarysd...he would normaly die at the end of the chal...but the removing will save him i guess? of course his str. doe not count for resolution — arathorn 1 8/19/17
If Mace removes a character that is affected by both Dracarys and a temporary STR buff, both of these lasting effects will expire for the removed character. He will reenter play unaffected by either. — mplain 221 8/19/17
Does the strength of the re-entering charachter count for dominance if it was removed in the challenges phase? (as it enters in "in the beginning of the phase") — GARL1CD0G 37 9/9/17
Yes, it does. The character enters play in step 5.1, dominance is counted in step 5.2. — mplain 221 9/9/17
@GARL1CD0G any lasting or delayed effects affecting it expire. So neither the Dracarys or the buff would remain. — Kakita_Rinsei 23 10/10/17
Would a chud removed in the marshaling phase re-enter play before First Snow (which is a Forced reaction to the beginning of the Challenges phase)? — scantrell24 3295 10/24/17
Yes, a character removed by Mace's ability will return to play before any Forced Reactions to the beginning of the phase trigger. — mplain 221 10/24/17
What would happen when both player are tyrell and one of them has reveal the plot white shadow then get a tyrell character from opponent by the white shadow then remove that character from play by Mace, what will happen to that character when it return? Or a faceless man copys a tyrell character then remove by him-?flee bottom — thelightofphoenix 13 10/29/17
I mean when the white shadow were replaced by a new plot. — thelightofphoenix 13 10/29/17
I assume the "catch" in your proposed scenarios is that the character removed by Mace is under your control only temporarily (via The White Shadows), or has the Tyrell faction affiliation only temporarily (via Faceless Man). There is no issue with that: Mace targets an eligible character (a Tyrell character you control), and removes it from the game. Once that character leaves play, any other lasting or delayed effects affecting that character expire. At the beginning of the next phase, that character returns into play as a new instance of the card - under its owner's control, and/or without the Tyrell faction affiliation. — mplain 221 10/29/17
Can I trigger Mace's first ability on himself the moment he enters play? — Daigelmir 1 4/18/18
Yes — mplain 221 4/19/18
When a character enters play at from this effect of teaching it can a player addy that time during the beginning of dominance pay 1 gold and recieve 1 power — Randyland 25 2/24/20
Typo. , sorry guys — Randyland 25 2/24/20
When a character is removed from the game during challenges and enters play during dominance can Mace at that time pass — Randyland 25 2/24/20
Damn n sorry for cursing — Randyland 25 2/24/20
When a character is removed from the game by Mace during the challenge phase and enters play during dominance phase can Mace at that time trigger his Reaction and pay 1 gold to recieve 1 power ? — Randyland 25 2/24/20