While attached character is participating in a challenge, set its STR to 1. (Other modifiers do not raise or lower its STR.)

Dissolved in wine, it would make the muscles of a man's throat clench tighter than any fist.
Dani Hartel
House of Thorns #43. 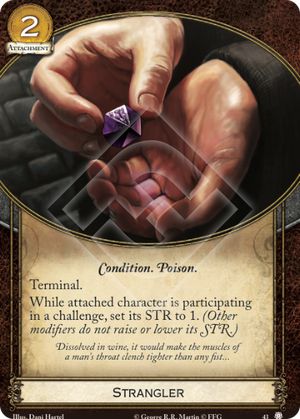 mplain 204
Will Randyll Tarly be able to stand himself if attached with Strangler and Heartsbane at the same time? — crossroads92 24 11/1/17
His STR is not increased, therefore his reaction ability cannot be triggered. Note that if you used an "until the end of the phase" buff instead of Heartsbane (e.g. Renly's Pavilion), then Randyll's STR would increase as soon as he stopped participating, and then he could stand. — mplain 204 11/1/17
My bad, the above comment is incorrect. Randyll will only stand if his STR increases at the moment of application of a STR modifier. If Strangler is removed, that would be an expiration of a STR lowering modifier, not an application of a positive STR modifier, so Randyll would not stand. — mplain 204 4/23/18
How is Strangler interacting with Daenerys (TFM)? My guess is, similar to Burning on the Sand with claim raising or lowering effects, word SET overrides raising and lowering, so her strength would be 1 during the challenge... — NikolaP 55 5/30/18
Setting STR to a lower value is still reducing STR, even though it's not a subtractive modifier. Deny's STR cannot be reduced, so it cannot be set to a value lower than 3... or whatever its current value is. — mplain 204 5/30/18
Here's the official ruling: http://www.cardgamedb.com/forums/index.php?/topic/39646-ruling-daenerys-targaryen-tfm-strangler/ — mplain 204 5/30/18