At least one character must be declared as a defender in each challenge, if able. 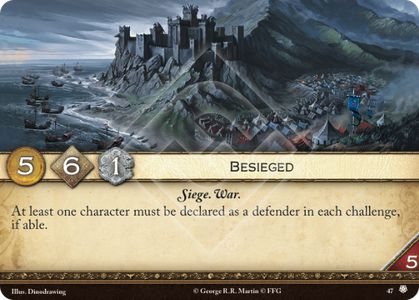 I don't to speak about the card but there is a little mistake, the name is BesIEged, not BesEIged.

Thanks for your works guys :) !

Laplante 214
If I have Margaery Tyrell (HoT) and i force an opponent to kneel a character, must he declare a separate character to be a defender if this plot is in play? — LockHowl 2 11/7/17
Yes. He didn't declare that character as defender, but was forced into participation. — ltlukoziuz 4 11/30/17
If I declare a challenge and my character is killed before my opponent declares defenders, does he still has to defend with someone (since the challenge has been launched anyway)? — Req 1 1/25/18